Opium is the latex juice emitted from the unripe opium poppy seed pod when it is scored. For thousands of years, opium has been used medicinally and recreationally for its ability to provide pain relief and produce senses of tranquility or well-being. Heroin is primary product of opium’s high morphine content and the opium-based derivatives, morphine, codeine, and thebaine are the main alkaloids used in the manufacturing of most opiate pharmaceuticals.

Opium comes in liquid, powders, or solid forms that can be ingested orally, smoked, snorted, or intravenously injected and with every repeat dose, there is a high potential to become addicted to the drug. The following, are the top 10 telltale opium addiction symptoms. 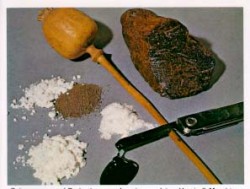 Cravings that appear out of nowhere are common opium addiction symptoms. Conditioned cues or reminders stored within the mind can reinforce continued use of opium regardless of whether or not you are consciously thinking about using. According to the Center for Studies in Behavioral Neurobiology, “drugs that are abused activate appetitive motivational systems of the brain, inducing behaviours and emotions that very rapidly become associated with stimuli and events in the environment where they are experienced” There is a higher level of importance placed on repeating the rewarding behaviors of opium use and the more exposures a person has the more relative information their mind will store.

2. Loss of Interest in Enjoyable Activities

After repeat exposure to opium, natural dopamine productions diminish to low levels and it becomes extremely difficult to maintain the sense of well-being without the use of opium. Loss of interest in enjoyable activities is an opium addiction symptom decreases the person’s quality of life by stealing them away from the things they love most. It leads many to isolation, depression, and suicidal tendencies from increased levels of guilt and low self-esteem.

Tolerance is an opium addiction symptom characterized by an increased need to consume more of the opium in order to feel the effects. According to the Institute of Medicine (US), “Opiate drugs bind to opioid receptors to produce their reinforcing effects.” As tolerance progresses, the brain attempts to adapt to the overstimulation of artificial dopamine increases from the use of opium by decreasing the number of opioid receptors responding to the stimulus.

As a result, the euphoria a person looks for when they use the drug becomes continuously harder to obtain without increasing the opium dose or possibly, using it via more rapid delivery methods such as switching from oral consumption to snorting or from smoking to intravenous injection.

After repeat exposure to opium, natural dopamine productions diminish to low levels and it becomes extremely difficult to maintain the sense of well-being without the use of opium. Opium dependency, like tolerance, is a cascade of neuro-adaptations to the presence of the drug.

Physical dependence to opiates includes symptoms of “dope-sickness” when levels of the opium drug in the body drop below the levels a person has become adapted to. In order to stave off pain, nausea, and adverse symptoms of withdrawals, the opium dependent must use opium more often.

Psychological dependence is more complex than physical dependence and increases the person’s vulnerability to continued use of opium. Psychological dependence characterizes the darker side of addiction through a series of cravings, adverse thoughts or behaviors, preoccupations with seeking, obtaining, and using the drug, along with an inability to control negative emotional states such as being overly anxious for the next opium dose, and mood swings. Violence, aggression, and neglect can be everyday symbols that someone has become addicted to opium.

A telltale opium addiction symptom is uncontrollable use where the cycle of abuse progresses from using the opium occasionally for the pleasure it brings to using the drug compulsively and despite negative consequences. According to the National Institute on Drug Abuse, “drug-induced changes in brain function can have many behavioral consequences, including an inability to exert control over the impulse to use drugs despite adverse consequences—the defining characteristic of addiction.”

Over time, the person becomes more vulnerable to the stress of not having the drugs available and they rely on the doses of opium to keep them functioning and to stave off cravings and withdrawals. The importance of opium often takes precedence over other needs in someone who is addicted and ongoing disruptions to the nervous system from repeat intoxications and withdrawals can lead to emotional instabilities. Drastic mood swings and frequent bouts of anxiety or depression can become extreme.

According to the Scripps Research Institute, “Drug addiction is a chronically relapsing disorder characterized by a compulsion to seek and take drugs and the development of dependence and manifestation of a negative emotional state when the drug is removed.” Relapse after trying to quit opium is an opium addiction symptom that signifies a need to make serious changes and seek treatment help.

Feeling the need to consume abnormally high amounts of opium is a serious opium addiction symptom that often leads to overdose and death. An opiate addict who combines opium use with other substances, has compromised health, or attempts to resume prior levels of opium use after they detox from the drug is at an increased risk.