Synthetically made opium-type drugs also exist in abundance, some of which include: 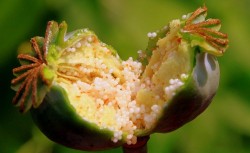 Many modern medications derive from the opium plant.

These chemicals also produce feelings of calm and euphoria, which greatly contribute to the addictive properties of the drug. With repeated use, this process works to weaken brain cells and impair normal central nervous system functions. Over time, the affected areas become unable to function normally without the effects of the drug.

The brain’s tolerance level for opium determines how large a dose is needed to induce the desired drug effects. With each successive dose of opium, brain cell sites become less sensitive to its effects. Cell sites grow progressively weaker from ongoing use, which makes them less sensitive to the drug’s effects.

With ongoing use, short-term opium drug effects snowball into a full-blown physical dependency on the drug. Once the brain and body become physically dependent, users start to experience withdrawal effects. Withdrawal effects result from pronounced brain chemical imbalances that grow worse with continued drug use.

For most people, withdrawal effects take the form of:

With chronic, long-term drug use, the brain’s tolerance levels will reach a point where no amount of the drug can keep withdrawal effects from developing.

Widespread chemical imbalances throughout the brain inevitably alter a person’s cognitive and emotional experience to the point where opium drug effects take on top priority in his or her life. At this point, strong drug cravings become a driving force for users’ motivations and behaviors.

While it may seem as if drug cravings stem mostly from the body’s physical dependency on opium, drug cravings take root within a person’s thought processes and emotions. This accounts for why recovering addicts can experience drug cravings long after they stop using.