Side Effects of Opium Use You Don’t Want to Experience

Opium is the latex juice collected from the poppy plant, Papaver somniferum, which contains many psychoactive alkaloid chemicals including morphine from which heroin is synthesized, codeine, and thebaine. Worldwide, opium poppy cultivations have dramatically grown as profits from these cultivations continue to increase for the productions of heroin and pharmaceutical painkillers. With increased access and availability of these drugs, more people are using opium than ever before.

Opium has ancient roots in the treatment of pain and other maladies, but, it is also well known for the destruction it brings to the addicted as well as to their families, loved ones, and the rest of society. The chance of experiencing unwanted side effects of opium use is foreboding and grave because while some people may enjoy its use in the beginning, it almost always takes the addict down the darkest of paths.

In its purest of forms, it is usually smoked, but, in the synthesized form of heroin, it may also be snorted or injected. These methods add to the power of the psychoactive chemicals to quickly reach the brain and elicit their effects, flooding it with dopamine, which is why opium is able to produce such a powerful euphoric “rush”.

Dependence results when the use is repeated and disrupts the brain’s natural abilities to manage neurotransmissions that regulate “normal” bodily functions, behaviors, emotions, and cognition. This adaptation causes the user to experience withdrawals if use is suddenly stopped and is the beginning of addiction, which according to the National Institute on Drug Abuse, “is a chronic relapsing disease caused by changes in the brain and characterized by uncontrollable drug-seeking no matter the consequences.” 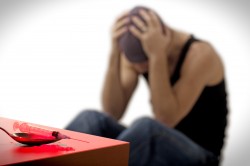 Opium abuse can lead you down a path of drug use that is lined with serious negative consequences.

No opium user ever wants to suffer opium withdrawals. The cravings for more opium are harsh, cruel, dominating, oppressions with desperation and obsessions to obtain and use more opium. With a total eruption of painful and unpleasant sensations throughout the body, these overwhelming sensations during withdrawal make you feel like you are “crawling out of your skin” and you wish you could actually do so to find some relief.

Depending on the levels of opium dependence, symptoms may include:

Inability to Feel Good without Opium Use

A side effect of opium use you don’t want to experience is the inability to feel good without opium use. This happens because the opium has left you dependent on it to produce the “feel good” chemical of dopamine that we normally produce whenever we experience pleasure.

Dopamine is released whenever certain opiate receptors are activated in our brains, but, repeat use of opium damages these receptors to the point that they become unresponsive and dopamine level productions are drastically reduced. No one can feel really “ok” without dopamine and when it is depleted or unavailable, unwanted neurological consequences are the result.

Common side effects of opium use you don’t want to experience are the physical and psychological health consequences. Opium is a powerful central nervous system depressant which can have an impact on every organ in your body. Opium users often have compromised health issues such as low immunity, liver, kidney, respiratory, and cardiovascular problems. They also are more likely to experience infectious diseases such as HIV, AID’s, Hepatitis, STD’s, tuberculosis, and bacterial infections from IV use.

Mental health disorders can be caused by opium use or exacerbated by it and the consequences can be impaired cognition, emotional control, judgment, inhibition, and impulse controls. Serious mental health impairments may be a result of repeat functional and structural disruptions that damage the brain’s circuitry resulting in long term neurological issues.

According to the World Health Organization, “Opioid overdose accounts for nearly half of all deaths among heroin injectors, exceeding HIV and other disease-related deaths.” Heroin is significantly more potent than it was several years ago and every dose is unpredictable. Even if the person survives the unwanted side effect of overdose, they may be subject to brain damage due to hypoxia or other organ damages as a result.

Negative social consequences are other side effects of opium use you don’t want to experience. They may include domestic, environmental, legal, employment, financial, or other disruptions to your life that can be extremely difficult to overcome. These distressful situations can lead to severe depression, isolation, or even suicide from the overwhelming stress they can cause.

Needing a fix can consume your every being and you may experience unwanted personality changes as one of the side effects of opium use. For instance, you can be the most gentile person in everyday life, but, when you use opium regularly, it becomes a main source of survival. You may become aggressive in your behaviors to continue using and when withdrawals set in, you are unable to control how you ‘lash out.