Opium is the latex juice emitted from a certain poppy species known as Papaver somniferum. The poppy pod is scratched or “scored” to emit the opium which is then collected and dried. Around the world, ancient use of unprocessed opium has been documented as the most potent pain relief medicine prior to the American Civil War.

In 1857, the hypodermic needle was invented and morphine was introduced as a liquid medicine that could be injected, in precise dosages, as needed. Morphine grew in popularity and replaced the use of unprocessed opium in common medicine practices.

Is Morphine Opium? Distinguishing the Difference

Opium is not the same as opiates which are the major psychoactive alkaloids extracted from the opium. According to the United Nations Office on Drugs and Crime, “The six opium alkaloids which occur naturally in the largest amounts are morphine, narcotine, codeine, thebaine, papaverine and narceine. Of these, three are phenanthrene alkaloids and are under international control: these are morphine, codeine, and thebaine. They are all three used in the drug industry, thebaine usually for conversion into some derivative which is more useful medically. Of the other three, not under international control, narcotine and narceine have scarcely any medical or other uses. Consequently, the four economically significant alkaloids of opium are morphine, codeine, thebaine and papaverine.opiates”. 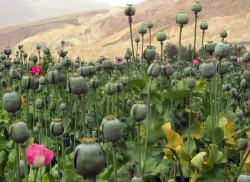 Morphine is a processed form of opium.

Morphine is the main alkaloid of opium and found in the highest content. It is also holds the highest medical importance as one of the most effective drugs known for the relief of severe pain. Morphine content of opium, as a percentage, varies by the moisture content. It also depends on how many times the poppy pod has been bled.

Normally, the morphine content of opium is between 8 and 19 percent after being air dried. Some cultivators have reached a percentage of up to 26 percent. Cultivators who score the poppy pod only once will typically yield the highest percentage of morphine content. Some cultivators will score the pod 4-5 times until the latex stops running and with each score, the quantity of opium and the content of morphine is lessened.

Morphine is frequently processed into heroin which is illegal and has no acceptable medical use. Morphine is classified as a Schedule II narcotic under the Controlled Substances Act. A small percentage of the morphine extracted from opium is used directly for pharmaceutical products while the remaining morphine is processed into codeine and other derivatives.