What Drugs Are Considered Opiates?

Opiate drugs all have one thing in common: they depress or slow down the body’s central nervous system. According to the Institute for Substance Abuse Treatment Evaluation, some opiates come from the raw, natural substance known as opium, while others are manufactured to have the same chemical structure as the raw opium material. 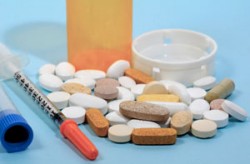 The medications and illicit drugs that derive from the opium poppy are considered opiate drugs.

According to Princeton University, opiates make up the wide variety of drugs made from, or based on, specific alkaloid substances derived from the opium poppy plant. While the poppy plant actually contains over 50 different alkaloid substances, not all of them carry analgesic properties. Of the 50 different alkaloids, only half of them qualify as raw opiate materials.

Technically speaking, only drugs made from the analgesic-type opium alkaloids qualify as opiate drugs; however, semisynthetic drugs are also derived from these alkaloids and can technically be considered opiates as well.

Natural opiate drugs exist as the purest renditions of raw opium materials. According to the University of Michigan, only three types of opiate drugs qualify as “natural”:

Of all the opiate drugs, morphine appears in the highest concentrations within raw opium materials. According to Weber State University, approximately 10 percent of opium is made up of morphine.

Opium tinctures take the form of alcohol solutions that contain the weaker analgesic alkaloids, such as Paragoric and Laudanum.

Each of the semisynthetic opiates exists in small concentrations within raw opium materials. Heroin is derived from morphine, but has a considerably higher potency than morphine because of the way it’s synthesized.

Likewise, hydrocodone, oxycodone and hydromorphone all have higher potencies than the alkaloids from which they’re derived.

These drugs work well as treatments for opiate addiction. Naloxone, in particular, can also be used to reverse the effects of opiate overdose in cases where respiratory failure occurs.