According to the Center for Substance Abuse Research, the opium poppy has had a long history of being used for medications. The ancient Mesopotamian and Sumerian cultures passed it on to the Assyrians, Babylonians, and Egyptians, and the Greeks introduced opium to India and Persia, where it was grown in mass quantities.

Opium has been used for its medicinal properties for centuries, as it is an extremely beneficial drug to help alleviate pain. Opium is the sap that is produced from the seedpod of the poppy plant. Opium contains different alkaloids in it, and two of them, codeine and morphine, are what many drugs are made from. 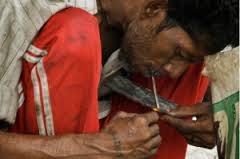 Opium acts on the brain and stimulates the reward system. This interplay causes addiction.

Morphine is stronger than codeine and is used in the majority of prescription painkillers, as well as used in its natural form in hospitals to help alleviate pain. Codeine is also used in various medications, such as cough syrups and Vicodin. Heroin is now an illegally made opium based drug, and it is made from morphine, although other chemicals and drugs are commonly added to the heroin sold on the streets, making the drug more dangerous.

According to the Center for Substance Abuse Research, in the 1800s when the British sold opium to china, millions of people became addicted to it, leading to the opium wars of China. Because opium was banned in China heroin was produced and synthesized from morphine by the pharmaceutical company Bayer, as it was supposed to be a safer, non-addictive form of morphine. However, by the twentieth century, heroin was understood to be highly addictive and was banned.

The addictive nature of opium caused so much chaos that it resulted in two wars in China. Opium is so powerful that it produces a sense of euphoria when taken, and it causes a user to feel completely relaxed and sedated while impairing their brain chemicals. The feelings that opium produces causes many people to continue to abuse the drug, and once a person continues to abuse opium, there is a high probability that they will develop an addiction.

Furthermore, opium abuse often leads to dependency, which means that a person’s body has now become dependent on the drug being present, and the person will go through withdrawal every time the drug is not in it. This causes people to continually take the drug to avoid withdrawal, and this also leads to addiction.

Drug addiction is a chronic brain disease that causes a person to compulsively seek out and use drugs despite the consequences, and opium is one of the most addictive drugs in America and around the world.