Opium or opium-based drugs have taken on a reputation as some of the most addictive drugs on the market. While opium itself comes directly from the opium poppy seed plant, opium-based drugs take on a variety of forms, from Dilaudid to Demerol to morphine and even heroin. Not surprisingly, effective methods of opium treatment for addiction are in high demand.

For the most part, the treatment approaches used within traditional addiction treatment programs have set the standard in terms of treating the key components of addiction. That being so, holistic methods of opium treatment for addiction has become more commonplace with a growing number of treatment programs offering holistic-type services.

Also known as integrative therapies, holistic methods of opium treatment incorporate a full-spectrum of treatment interventions designed to address any and all imbalances within a person’s physical, psychological and spiritual make-up. While many holistic-based opium treatment programs may still use aspects of the traditional treatment model, their overall approach is based on a “whole-person” perspective.

According to the National Institute on Drug Abuse, effective addiction treatment programs take a “whole person” approach to treatment rather than focusing on the “symptoms” of addiction. Symptoms of addiction have more to do with the physical and psychological effects of chronic drug use with little to no emphasis placed on how addiction damages a person’s spiritual health. 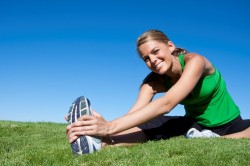 Exercise and nutritional therapy are among the holistic opiate addiction treatments.

Opium addictions start out innocently enough, whether a person takes the drug as a pain treatment or abuses it for recreational purposes. When used in excess, the effects of opium on brain chemical processes inevitably lead users down the path to addiction.

Over time, the brain develops an ongoing tolerance for the effects of opium to the point where the drug becomes a needed chemical within the brain’s overall system. This tolerance stems from opium’s ability to increase levels of neurotransmitter chemicals in the brain by stimulating the cells that secrete these chemicals.

This constant stimulation causes structural damage to cell sites, which in turn makes them less responsive to opium’s effects. To counteract these effects, users must take larger drug doses. This cycle continues for as long as users keep abusing the drug. Meanwhile, a person’s physical, psychological and emotional well being suffers considerable decline.

Holistic methods of opium treatment work to help addicts restore an overall balance in their lives, which requires an all-inclusive approach to treating addiction’s effects.

Traditional opium treatment programs view addiction as a disease-type condition. From this perspective, treatment entails managing the symptoms of the disease much like physicians manage symptoms brought on by diabetes or heart disease.

Rather than base treatment on the presence of addiction, holistic-based opium treatment programs work to address the underlying issues that drive a person to seek escape through continued drug use. Underlying issues can vary from person to person, some of which include –

By using a natural healing approach, the focus of opium treatment for addiction remains on the person rather than on addiction’s effects.

Learning to manage stress in constructive ways makes up a big part of the holistic approach to opium treatment. People recovering from addiction face a number of stressors, many of which stem from addiction’s damaging effects on the mind and body. Stressors may include:

While medications used in opium treatment can go a long way towards helping to relieve the physical and psychological aftereffects of addiction, learning how to better manage daily stressors and relationships helps a person get to the root of an addiction problem.

Opium’s damaging effects on the body’s metabolism processes can persist long after a person stops abusing drugs. The body’s inability to fully metabolize nutrients leaves it in a weakened and depleted state, which can make it that much harder to resist drug cravings. It’s not uncommon for people in recovery to suffer from vitamin deficiencies and ongoing fatigue as a result of long-term drug use.

Alternative therapies used in opium treatment provide healing for the mind, the body’s energy system as well as the spiritual aspects of self. Therapies commonly used include –

While holistic-based models do take a different approach to opium treatment for addiction, most programs still employ many of the methods used in traditional-based treatment. In effect, holistic methods are designed to complement the standard treatment interventions found in traditional addictions programs.

Ultimately, talk therapies, and in some cases medication treatment, become a necessary part of the recovery process. Holistic-based programs add to these standards methods in an attempt to address addiction problems at a deeper level.