The DEA states, “Physical dependence is a consequence of chronic opioid use, and withdrawal takes place when drug use is discontinued.” When people suddenly stop abusing prescription opiates, heroin, and other types of narcotics, they will encounter a number of symptoms that usually fall into a specific pattern and timeline. Overall, most opiate withdrawal syndromes usually last for week or more, but every case is different.

According to the NLM, “Symptoms usually start within 12 hours of last heroin usage and 30 hours of last methadone exposure,” although there is no assurance that every withdrawal syndrome will be the same. The early symptoms are usually the most uncomfortable and painful. It will feel as if you have the flu. In general, these might last anywhere from two to four days. Early symptoms are: 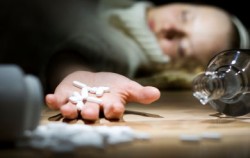 Late stages of Opiate withdrawal include nausea and depression.

Some of the early stage symptoms will likely run into the later stage. This is when it will be difficult for the individual to keep food down, and it will be better for them if they stay at home and in bed. Often, the pain may linger but it is usually very intense toward the beginning of the withdrawal phase. The late stage will often last about as long as the early stage, sometimes longer. Some of the late stage symptoms are:

This period will be uncomfortable as well, and it will be difficult for the individual to go anywhere. It is extremely important that they stay hydrated because the vomiting and diarrhea may cause them to lose a substantial amount of fluids. Those who are addicted to opiates will begin to feel strong cravings at this point which can be very difficult to endure without proper treatment.

Many people will feel the symptoms from the late and early stages start to subside but may still be under the effects of their withdrawal. Depression can be difficult during this time and so can general weakness from the body being under such a strain (vomiting, pain, etc). The best action to take is for the individual to go easy for a couple of days following their withdrawal. Make sure that they have someone with them so that they can discuss their feelings, especially if they become depressed, and that they do not try to do too much too fast.

What Should I Except for the Opiate Withdrawal Timeline?

It is best to give the individual as much time as possible to convalesce and not to expect them to bounce back quickly. They may be able to attend detox or addiction treatment in order to shorten their withdrawal time and to curb some of their worst symptoms. This could be incredibly beneficial to their overall recovery (especially if they are addicted to opiates). Still, every withdrawal syndrome and timeline is different, but treatments like medication, support groups, and therapy can be hugely beneficial.