Understanding Opiates: What is Opium?

Opium is the latex juice that is emitted from the opium poppy plant, Papaver somniferum, when the poppy pod is scored. No one knows exactly when the pain relieving or psychoactive effects of opium were first used, but, it may have begun with its ability to produce euphoria for which the Sumerians called it “Hul Gil” or the joy plant and for which opiates are highly abused today.

Historical information and references to opium go as far back as 3400 B.C. as a drug used for ritual purposes. As opium poppy cultivations expanded from lower Mesopotamia throughout the Middle East and Egypt it became known for its anesthetic properties. References to opium as a “remedy to prevent excessive crying of children” may date back to 1500 B.C., according to an article published in the journal of Proceedings of the National Academy of Sciences of the United States of America by the National Institute of Mental Health.

As early as the sixteenth century, abuse and tolerance have been documented and addictions spread wherever the opium became available. China suffered a severe epidemic of opium when they began smoking opium in the mid-seventeenth century and when they immigrated to America in the early 1800’s, their public smoking of opium and “opium dens” became a source of political controversy and stigmatization that spread around the world.

Pure opium was the most viable source of medicine for anesthesia, antidepressants, pain, cough, and a variety of other maladies throughout the 19th century. Medicines containing opium were available over the counter and during that time, the discovery of morphine and the hypodermic syringe increased the possibilities of medicinal uses and revolutionized pain control. 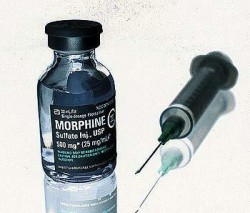 Morphine is a widely used legal type of opiate.

Opium contains five principle psychoactive alkaloids from which pharmaceutical opiate medicines are made. Morphine is most abundant and the others are codeine, thebaine, papaverine, and noscapine. All are controlled by the DEA along with their derivatives, semi-synthetic and synthetic substitutes under the Controlled Substances Act. Most are classified as schedule II substances having a legitimate medical purpose with a high potential for abuse and dependence. Heroin is an opiate, however, that has no acceptable medical purpose, no safety in use, and is totally illegal, classified as a schedule I substance under the CSA.

Common opiate medicines include morphine, codeine, oxycodone, hydrocodone, and a hundreds of different derivatives, combinations, and brands. Methadone and Fentanyl are examples of synthetic opiates that produce the narcotic effects while not being processed from any opium or its derivatives.

Opiates act as central nervous system depressants to reduce pain stimuli while producing a calming or euphoric effect. They also depress breathing and heart rate which can lead to overdose and death. Opiate abusers often experience the euphoria as the preferred effect, but, once addiction takes hold, there is an overwhelming need to consume higher amounts of the drugs leading to uncontrollable cravings and use, despite the adverse consequences; and withdrawals when the drugs become unavailable.