What is the Opiate Withdrawal Timeline?

Opiates are a host of drugs derived from the opium poppy plant or sharing similar chemical structures that penetrate and affect the “endogenous opioid” neurotransmitter systems in the brain and central nervous system (CNS) producing analgesia, sedation, relaxation, and euphoria.

According to the NIDA,” The consequences of activating opioid receptors with externally administered opioids such as heroin (versus naturally occurring chemicals within our bodies) depend on a variety of factors: how much is used, where in the brain or body it binds, how strongly it binds and for how long, how quickly it gets there, and what happens afterward.”

An opiate withdrawal timeline is the unique period of time it takes for an individual to clear the opiates from their bodily systems and reduce the dependency they have developed in the course of their opiate use. As often is the case, physical symptoms of an opiate withdrawal typically subside long before the complexity of the psychological symptoms can be dealt with, consequentially, increasing the potentials to relapse.

As opiates are repeatedly consumed, a number of physiological changes take place in the brain and CNS that are not easily reversed when the individual stops using the drugs. According to the research studyby theScripps Research Institute “the deviation from normal brain emotional regulation (i.e., the allostatic state) is fueled by numerous neurobiological changes, including decreased function of reward circuits, loss of executive control, facilitation of stimulus–response associations, and notably recruitment of the brain stress systems.”

Trouble comes in the wide variances of physical, psychological, environmental, and contextual influences that interplay with the unique traits and experiences of the individual throughout the course of opiate use and become profoundly adverse when the drugs are not available. Compromised health plays an active role in determining the opiate withdrawal timeline onset, severity, symptom logy, and duration. According to the SAMHSA “Naturally occurring opioid withdrawal is almost never life threatening, but it can produce discomfort severe enough to warrant urgent intervention.”

An opiate drug’s half-life plays a crucial role in the opiate withdrawal timeline. Morphine is the main opiate chemical to which other opiates are compared for their clinical effectiveness with a molecular structure that resembles natural endorphins we use to regulate responses to rewards, pain, and stress. According to the Institute of Medicine (US), “There are significant differences, however, in how the major narcotic types are absorbed and metabolized outside the brain; these difference affect the duration and rate of their central nervous system effects.”

Opiates with a shorter-half-life such as heroin, morphine, codeine, oxycodone, and hydrocodone products require more frequent dose administrations compared to opiates with longer-half lives such as methadone, buprenorphine, and those that contain time-release mechanisms intended to last longer and deter abuse. Typically, the shorter the half-life, the more abusive the drug becomes and with higher doses and frequencies comes an earlier onset (around 4-6 hours after last dose) and greater intensity of the withdrawal symptoms. Those who abuse opiates via non-oral routes of administration are “significantly more likely to experience substance use related problems” according to the NCBI.

People who use opiate drugs with a long half-life may have extended durations and more difficulties although the emergence of symptoms is typically later, around 24 – 36 hours depending on tolerance and the amount of the drug being stored the body and not yet, metabolized. Drugs like methadone and buprenorphine are beneficial in reducing tolerance, cravings, and the associated harmful behaviors of those dependent on short–acting opiates, but, a gradual or supervised withdrawal is always recommended. 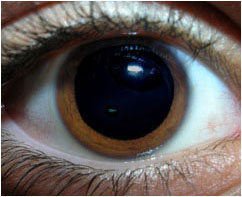 The early phase of opiate withdrawal might involve dilated pupils.

Beginning with cravings for more opiates and symptoms of restlessness and anxiety, the early phase of the opiate withdrawal timeline increases in its adversity as the calming effects of the drugs wear off and nervous systems are re-stimulated. Other signs and symptoms of the early phase in the opiate withdrawal timeline may include:

Thoughts, emotions, pain, and stress become increasingly bothersome during the acute phase of the opiate withdrawal timeline which progresses in intensity, severity, and symptom logy, peaking at around 3-4 days. According to the DEA 2011 Resource Guide, “without intervention, the withdrawal usually runs its course, and most physical symptoms disappear within days or weeks, depending on the particular drug.”

Most addicts never complete the withdrawal process to this point or beyond because even as the physical symptoms begin to subside after several days of abstinence, the acute psychological symptoms can linger for weeks.

During the acute phase of the opiate withdrawal timeline, the person experiences intensified early phase symptoms along with possible signs and symptoms of:

Repeat intoxications and withdrawals from opiates have a harsh effect on neurobiological functions that help maintain senses of wellbeing. Long after the drugs are out of the body, the residual effects are often inter-mingled with mental health disorders, social impairments, and environmental stresses that can subconsciously trigger cravings in an instant. The post-acute phase of the opiate withdrawal timeline can go on for years and last indefinitely.