According to the Drug Enforcement Administration, “Fentanyl is a potent synthetic opioid… [that] was introduced into medical practice as an intravenous anesthetic under the trade name of Sublimaze in the 1960s.” Since then, the drug has become one of the most widely used opioids in medicine today. However, the use of fentanyl derivatives is also popular, both for medical and illegal purposes.

Fentanyl derivatives are different types of synthetic drugs that are derived from fentanyl. When scientists take an existing drug and modify it in order to create a completely new drug, this is called a derivative. These substances are very similar to the original drug in structure and may sometimes differ by only one ingredient. Scientists create these derivatives because they are attempting to find a better, safer, cheaper, or more effective substance than the one that already exists. Fentanyl has a number of derivatives that have been created using the original synthetic drug. 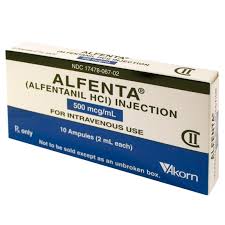 Alftenta is a common Fentanyl Derivative.

The main types of fentanyl derivatives include:

These drugs, according to the European Monitoring Centre for Drugs and Drug Addiction, “are used as anesthetics and analgesics in both human and veterinary medicine.” In addition, there are also a number of other derivatives of the drug, including:

Certain fentanyl derivatives are beneficial and can even be used by doctors to treat patients in need of pain relief. In the same way other prescription opioids are used, certain derivatives can be prescribed by a doctor to help treat individuals with chronic pain. According to the National Library of Medicine, “Fentanyl is used to treat breakthrough pain (sudden episodes of pain that occur despite round the clock treatment with pain medication),” and derivatives of the drug are often given for the same reason. The main fentanyl derivatives listed above can all be used safely under a doctor’s prescription.

These substances are safe to use under a doctor’s care but are illegal to use without a prescription. However, there are a number of fentanyl derivatives that are not used medically at all and are actually produced illegally for the purposes of selling. These drugs are extremely dangerous and can sometimes be much more potent than regular fentanyl and other opioid analgesics. It is important to understand the difference between fentanyl, its medically beneficial derivatives, and its illegally produced derivatives.

What are the Side Effects of Fentanyl Derivatives?

The common side effects of fentanyl derivatives are similar to those caused by other opioids, including:

It is important to remember that any derivative of the drug, like any other opioid analgesic, can be dangerous if misused. Many of these drugs are not fit for medical use at all because they are too potent, but even those that can be used medically may cause a number of harmful side effects, such as:

All of these issues are more likely to occur and become intensified if an individual abuses fentanyl derivatives. Unfortunately, these drugs are similar to all opioids in that they cause euphoria, relaxation, and pain relief, so they are often abused for their desirable side effects. This behavior can lead to harmful, or even deadly, results, which is why you should never take any kind of fentanyl derivative unless it is prescribed to you by a doctor and why you must follow your doctor’s instructions when taking the drug.

Different fentanyl derivatives have different potencies, some being stronger than parent drug itself while others are less potent. However, it is important to remember that they are all––in essence––opium derivatives, which means these drugs may cause all the same side effects and issues caused by other opioids. Therefore, it is important to discuss any of these medications with your doctor before taking them and to avoid taking any unprescribed fentanyl derivatives.