What are Synthetic Opioids?

Synthetic opioids, according to ISATE, are narcotic analgesic drugs that are “manufactured in chemical laboratories with a similar chemical structure” to natural opiate drugs. These substances can be illicit drugs or medications that are legally prescribed by doctors to treat patients with mild to severe pain issues. They have many of the same qualities that opiates do, despite being manmade.

Which Opioids are Synthetic?

There are actually a large amount of opioids that are either synthetic or semi-synthetic (meaning that they are synthesized from naturally-occurring opiates). These drugs are used and abused in many different ways and can be both beneficial and dangerous to users, even deadly if taken in high enough doses.

The common synthetic and semi-synthetic opioids are: 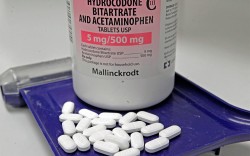 Hydrocodone is an example of a synthetic opioid.

Synthetic and semi-synthetic opioids can be both beneficial and dangerous, both licit and illicit. These drugs were all manufactured for a reason, usually to create a better, less addictive, or safer painkiller than those which already existed.

How are Synthetic Opioids Made?

How Should Synthetic Opioids Be Used?

Synthetic opioids should only be used under the instruction of a doctor. All opioids are scheduled by the DEA in order to prevent abuse as much as possible. The only individuals who should take opioids are those who have been prescribed them and, even in that case, patients must never deviate from the specific prescription of their doctors. Any time a user takes synthetic opioids in a way not prescribed by a doctor, that user is abusing them.

Also the way synthetic narcotics are manufactured should not be altered by the users of the drugs, as it could become problematic. According to the Massachusetts Dept. of Public Health, “Tampering with how an opioid medication is manufactured can turn a long-acting, less potent medication, into a more potent, rapid acting one.” Unfortunately, many drug abusers break apart synthetic drug tablets and crush them in order to snort them, making them much more dangerous.

These drugs can be deadly when abused, especially in high doses. Even completely synthetic opioids can still cause the respiratory depression that is the reason for most narcotic overdose deaths. When they are used by prescription as a treatment for pain patients, these drugs are not as dangerous, but abusing them can cause many problems to occur. When taken with other substances that slow down body and brain functions, like alcohol, synthetic opioids are even more likely to cause a deadly overdose.

When abused, yes, these drugs are addictive. According to ISATE, “Opioids relieve stress and discomfort by creating a relaxed detachment from pain, desires, and activity.” Someone who abuses them often will come to crave these feelings and might begin to display the signs of addiction, including:

Synthetic opioids are just as addictive as natural opioids when abused, and this issue has not been solved by the derivation or synthesizing of any one opioid drug, although there is work being done to create safer opioids. Stanford University states that its bioengineers are close to “brewing painkillers” from yeast instead of poppy plants, but it is unknown whether these drugs might be safer or less addictive.

Synthetic opioids can be used safely if patients follow their doctors orders, but these drugs can be extremely dangerous when abused. Although they do not occur in nature, synthetic opioids act similarly to organic opiate drugs, causing all the same effects depending on how they are used.