There are many names for opium on the streets. Some refer to just opium while others might refer to the drug when combined with other drugs, or they may be references to the drug in a manner in which it is used. Many of the names have derived from the historical use of opium by the Chinese such as Buddha which is the term used to describe marijuana that has been laced or spiked with opium. The many different street names that have developed over the years to describe opium are reminiscent of the fact that opium truly has been around for quite some time.

If you’re walking down the street and you hear someone refer to an “A-bomb” there is a good chance they are describing a joint (marijuana cigarette) that also has opium or the derivative of opium, heroin, inside of it. Some refer to marijuana that has opium in it as Gong, Hocus, or Indonesian Bud. The “Indonesian Bud” name comes from the fact that opium was widely cultivated in Indonesia in earlier times and can still be cultivated there today but the vast majority of the world’s supply of the drug comes from Afghanistan. 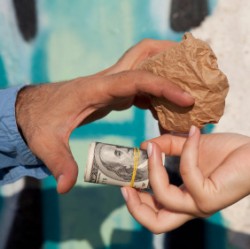 Some of the street names for opium that are derived from the history of the drug and ancient Chinese use that dates back to the 15th century or earlier include:

There are many other slang names used to describe opium such as Aunti or Aunti Emma which is used to describe opium likely due to the relation of the poppy plants that were used in the movie, The Wonderful Wizard of Oz when the Wicked Witch spread poppies all over and made Dorothy & her friends fall asleep before making it to the Emerald City.

Many of the street names for opium describe the dark, black color of the drug or the stickiness of the drug. Opium is commonly referred to as Tar, Black Stuff, or Black Hash. Black Jack, Black Pill, Black Russian, Hard Stuff and Mud are also terms used on the street to describe opium. Probably the most commonly used street name for opium is Tar but this can also be used to describe heroin which is a refined drug that comes from opium.

Opium that comes from Veracruz, Mexico is called Cruz. The Spanish also use the term Goma to describe opium that is mixed with black tar heroin. Mira is another street name for opium that is used in the Spanish language.

You may also hear opium described on the street as any one of the following: