According to the DOJ, “Opium is a highly addictive non-synthetic narcotic” and the fact that it is a natural substance often causes many people to not worry about its addicting nature. If you are concerned that you might be addicted to opium, consider these telltale signs.

Tolerance, when paired with the abuse of an illicit substance, is often a strong sign of addiction. The NIDA states that tolerance is “a state in which an organism no longer responds to a drug.” What happens is that the person abusing opium will need more and more of the drug in order to feel the same effects. This is a telltale sign of opium addiction.

If you experience these symptoms often when you cannot smoke opium, you are already physically dependent on the drug. Some of the psychological symptoms will also go along with opium addiction and the next telltale sign.

Cravings are always a sign of addiction. People who become dependent on drugs that they are not abusing do not experience cravings, but those who abuse addictive drugs do. You will want to smoke or do opium all the time and, to fight these cravings, you may take prescription narcotics if opium is not available. You will think about doing opium constantly. The two signs of physical and psychological dependence, coupled with cravings, all point to opium addiction in long-term users. 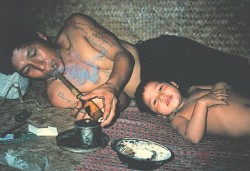 If you cannot stop smoking opium and are smoking despite the consequences you may need help.

If you are unable to stop smoking opium, you are already addicted. Many people experience issues from their opium abuse that range from health problems to personal problems. The DOJ states that opium “can dry out the mouth and mucous membranes in the nose.” A person could experience chronic issues from this or also from the constipation opium abuse causes. Other problems users may experience are:

Someone who experiences more than two of these issues in a year and cannot stop smoking opium is likely addicted. Many people know that their use of opium is bad for them, but they cannot stop on their own.

“Wide mood swings” are a common effect of opium abuse, according to the DOI, but these issues do not end here. Many opium abusers also experience other behavioral changes like:

If these telltale signs describe you, consider attending treatment for opium addiction today, as you are likely already addicted to the drug.