Emerging Trends in Fentanyl Use

Fentanyl is a very powerful painkiller normally reserved for those with advanced stage cancer or severe chronic pain. For this purpose, it works wonderfully. Most patients feel that the Fentanyl patch is a great product for their pain. Unfortunately, there are dangerous emerging trends regarding the illegal use of Fentanyl.

According to the National Institute on Drug Abuse, Fentanyl is rapidly becoming one of the more dangerous opium based medications in the United States. Doctors say it is 50 to 100 times stronger than morphine and it is easy to abuse.

Standard Overdose Deaths Due to Fentanyl

There are rising reports of overdose deaths from just using Fentanyl improperly. Many people do not realize that the transdermal system that Fentanyl uses distributes the pain medication into the bloodstream slowly. When they do not feel immediate relief, they think that it is not working correctly or that the patch is defective. They then apply another patch or combine it with another opium-based medication. This often proves to be a grave error.

As the medication is absorbed through the skin, it takes a bit for it to work its way into the blood stream. Many people do not realize that adding to what is already absorbed might prove to be a deadly mistake. 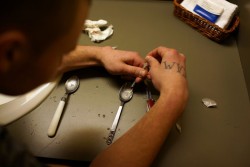 Mixing Fentanyl with heroin is an emerging trend.

Non-standard overdose deaths are deaths that are not because too much of the medication is administered. Many of these deaths point to a very disturbing emerging trend in Fentanyl abuse. According to a bulletin published by the National Institute on Drug Abuse on July 9th, 2015 Fentanyl patches are now being injected with:

This process does not have a name but is currently causing major overdose deaths in Maryland, Michigan, and several other states. Part of the problem is that although Fentanyl overdose can be reversed by delivering Narcan, this process can prove fatal when Fentanyl is mixed with other legal and illegal drugs. Narcan is a drug administered during an overdose the immediately reverses all effects and sends the unfortunate person into withdrawal.

Although the latest trend is to mix Fentanyl with heroin there are other up and coming mixes. Some drug dealers are using the Fentanyl gel to come up with new ways to get high. One of the most frightening trends is the dramatic increase in Fentanyl related deaths. Each year the death toll rises. As of 2013, as many as one quarter of the overdose deaths were due to Fentanyl use and abuse.

Fentanyl is a highly addictive opiate that is more potent than heroin. It is incredibly easy to misuse and therefore become addicted. For more information or for help with Fentanyl and other addictions call us at 800-429-5210 (Who Answers?).