Opiate prescription drugs comprise both natural and synthetically made substances. Both groups of opiates derive from the opium poppy seed plant in terms of their chemical make-up and intended effects.

Drug manufacturers can formulate a wide range of drug potencies, which makes for an across-the-board treatment approach for any type of pain-related condition. While these drugs no doubt meet real treatment needs, rates of opiate prescription drug abuse exceed those of all other drug types, according to the National Institute on Drug Abuse.

Effects on the Brain & Body

According to Princeton University, the poppy seed plant contains 25 pain-relieving alkaloid compounds from which opiate prescription drugs are modeled after. The human body also contains its own opioid system that helps in relieving pain symptoms.

Opiates work by stimulating the production of endorphin or neurotransmitter chemicals throughout the brain and central nervous system. These effects work to prevent incoming pain signals from reaching the brain. Incidentally, opiates and endorphins share certain similarities in chemical structure.

With similar chemical structures, the brain can easily integrate opiate drug effects within its own chemical system. These interactions can make for a dangerous chain of events in cases where a person abuses opiate prescription drugs on a regular basis.

When forced to output excess amounts of endorphins on a frequent basis, these cells become overworked. Before long, cell sites start to take on structural damage, which weakens their ability to produce needed chemical supplies.

As cells grow weaker, larger drug doses are needed to produce the desired effects. When this happens, the brain’s tolerance level for opiates increases. 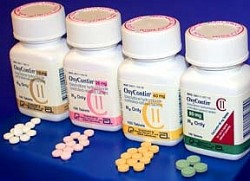 Don’t get caught up in a cycle of prescription opiate abuse.

Meanwhile, the repeated surges of endorphin chemicals create a state of chemical imbalance in the brain over time. Under these conditions, the brain’s ability to regulate the body’s functions sees considerable decline.

As brain functions falter, various processes throughout the body start to breakdown. At this point, opiate prescription drug users start to experience withdrawal effects in response to the brain’s weakened functional capacity.

Withdrawal effects may take the form of:

In order to alleviate withdrawal discomfort, users ingest more of the drug in an attempt to self-medicate withdrawal effects. When taken on a regular basis, opiate prescription drug abuse practices can easily develop over a short period of time.

Opiate prescription drugs do a number on the brain’s chemical system, causing widespread chemical imbalances throughout. After a certain point, these conditions start to impact the brain’s reward system, the area most responsible for the types of choices a person makes throughout any given day.

In effect, the brain reward system determines a person’s priorities and motivations based on the types of reinforcing stimuli it receives on a regular basis. Not surprisingly, endorphin chemicals regulate this system so any changes or fluctuations in endorphin levels will set off changes in the brain’s reward system.

At this point, a person’s lifestyle will undergo drastic changes as drugs take priority in his or her life, according to the Boston University Center for Psychiatric Rehabilitation. These changes may include:

The brain’s tolerance for opiates increases at a much faster rate than the body’s major systems. As opiate effects directly impact central nervous system functions, too high a dose can easily shutdown critical bodily functions. Systems most affected by opiates include:

5. Gateway to Heroin Use

According to the U. S. National Library of Medicine, opiate prescription drugs carry a high risk of abuse and addiction regardless of the intended purpose for use. Even when used for pain treatment purposes, tolerance level increases nullify the drug’s pain-relieving effects. The resulting pain flare-ups can easily drive a person to increase the dosage amount in order to gain relief. For these reasons, opiate prescription drugs should only be taken on a short-term basis.