Opium is a drug that has been around for thousands of years according to the Public Broadcast Systems, Frontline, show “The Opium Kings,” opium has been around in some form or another since 34000BC. When its analgesic properties were first discovered. The knowledge of how to process and use it was gradually passed down for centuries from there.

In ancient history, the opium poppy was revered for its uses. In ancient times it people would use it for:

Ancient peoples passed it from one kingdom to another to as many of these things. The largest use was in medicine. Just about every medicine from early BC up until the 1500s contained opium. In China in the 1500s, it resurfaced as a subversive practice, only to be rediscovered again by the Europeans who began to use it recreationally. It wasn’t until the 1500s that people began to use opium as medicine again.

The Europeans mixed it with citrus and gold and used it as painkiller for a few hundred years. Opium did not become truly popular until the early 1800s. 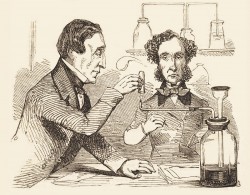 Opium was thought to be safe in the early 1800s.

In the early 1800s both Germany and the United States started using opium as a medicine again. This is was when morphine was invented and it rapidly became “god’s own medicine.” They thought of it as a very safe drug and did not realize how addictive it was at the time.

It wasn’t until the mid 1800s that Opium use really became a problem in the United States. The Chinese began to smuggle it into the US where it started to take hold as a popular recreational drug in the upper class as well as Chinese living in America.

It wasn’t until 1895 that an alternative to straight opium or morphine was manufactured. A person from the Beyer Company managed to refine it down to what is now known as heroin.

Modern opiate use hasn’t changed a whole lot since its discovering in ancient times. Once used for medicine the opiate manufacturers rapidly learned of its addictive properties and began to regulate it. Opium is now seen in a number of it various forms such as:

Today it is one of the most addictive highly regulated drugs on the market. Although it has its uses as pain killers, cough medicine, and anesthetics, it is one of the most widely abused drugs on the market today. If you or a loved one has a problem with painkillers, opiates, or opioids, perhaps it is time to seek help. Many people do not stop using opiates or opium because the withdrawal is extremely unpleasant. Fortunately, it is not deadly and can be beaten with the use of medication management and counseling. For more information on how to get off this age old drug call us at 800-429-5210 (Who Answers?).