The symptoms of opium withdrawal are broken up into three categories: the early, middle, and late stages. During each stage, symptoms will often last for at least a few days and may run over into the next stage depending on the individual’s experience.

The early stage symptoms of opium withdrawal usually last one to two days and begin around twelve hours after the last dose. Withdrawal will occur as a result of “stopping or dramatically reducing opiate drugs after heavy and prolonged use (several weeks or more)” (NLM). The symptoms of this condition may be incredibly intense during a short period of time or more mild but longer lasting, depending on the amount the individual abused and the frequency of their drug abuse. 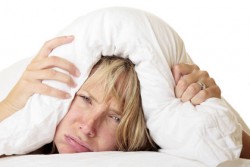 Early symptoms of opiate withdrawal include insomnia and restlessness.

The final group of symptoms (including runny nose, increased tearing of the eyes, chills alternating with hot flashes, goosebumps, and yawning) often cause many individuals to initially believe that they have the flu. However, with the long-term abuse of opium, cravings will also be present. Many of these symptoms will stop after a few days, the transition noticeable as the intense pain begins to subside. However, diarrhea, which is more often associated with the middle stage, can start during the early stage as well.

The middle stage is usually less difficult for withdrawing individuals to undergo without relapsing, but it can be very unpleasant on its own. Like the early stage, these symptoms last for another one to three days, making the first two stages together likely to last the better part of a week.

The middle stage symptoms include:

Shivers and goosebumps can often be experienced well into this stage. However, this stage is usually distinguished by the gastrointestinal issues caused by opium abuse. According to the DEA, “Opium inhibits muscle movement in the bowels” which is what leads to constipation and the other GI issues. The body is attempting to recover from these issues during the middle stage, which may last until the fifth day of withdrawal.

The late stage is often the longest, lasting anywhere from one day to a week or more. That is because the symptoms of the early and middle stages may linger during this period or that the individual may not feel back to their full strength until some time afterward. This is why it is so important for the individual to avoid returning to their full schedule until all of the symptoms have subsided.

Opium withdrawal symptoms overall will usually last a week to a week and a half, although sometimes they can last longer. Specific symptoms will often last as long as listed above, though there can be some variation. While the opium withdrawal timeline can be determined in many ways, it is important to pay attention to your own symptoms and to handle your withdrawal at the pace that is most beneficial to you.