Opium exists as a natural analgesic agent in the form of the opium poppy seed plant. Consequently, a wide range of prescription (and illegal) drugs has been formulated from this natural material. Whether taken for medicinal or recreational purposes, opium-derived drugs pose a high risk for abuse and addiction. 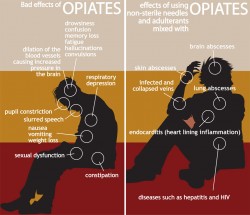 Opium and other opiates have significant short and long-term effects.

Opium’s natural analgesic effects start in the brain and travel throughout the body via the central nervous system. Opium has a similar chemical make-up as the brain’s own natural endorphin or pain-relieving chemicals. When ingested, the brain metabolizes opium in the same way it metabolizes its own endorphin materials.

According to the University of California at Los Angeles, opium long term effects result from brain chemical imbalances that develop as opium overpowers normal brain functions. These combined effects make opium (and its derivatives) one of the most powerful psychoactive drugs in existence.

Continued opium use also triggers increasing tolerance levels in the brain. This means the longer a person uses the larger the dose needed to create the same expected effects.

As the brain’s tolerance levels continue to rise, users eventually reach a point where no amount of opium will produce the desired effects, nor will it relieve withdrawal effects. At this stage, opium long term effects have caused real damage to brain structures and, for the most part, have warped normal brain chemical processes.

Even though brain tolerance levels continue to increase, large dosage amounts can quickly overwhelm other major bodily processes, such as respiratory and cardiac functions. These conditions place users at a high risk of overdose.

Of all opium long term effects, addiction exerts the greatest damage of all in a person’s life. The physical toll an opiate addiction takes on a person’s health can lead to the development of other serious medical conditions.

Once addiction takes over a person’s thoughts and behaviors, it becomes difficult to maintain relationships or hold a job for any length of time. Ultimately, users see their lives slowly fall apart as opium’s effects take over.