Does Opium Abuse Lead to Heroin Use?

Recently, research has suggested that those who abuse opioid painkillers like hydrocodone, oxycodone, and codeine are likely to begin using heroin if they continue their dangerous prescription drug abuse. According to the National Institute on Drug Abuse, “Nearly half of young people who inject heroin surveyed in three recent studies reported abusing prescription opioids before starting to use heroin.” But can the recreational use of opium lead to heroin use in the same way opioid painkiller abuse can?

Many people feel abusing opium is not as dangerous as abusing heroin, but this is untrue. However, this is the reason why some drug users prefer the former when attempting to feel the type of opioid-induced high they seek. The two euphoric highs caused by both drugs are very similar; however, there is a strong chance that a person who abuses opium could potentially become a heroin user before too long. It mostly depends on whether or not the individual continues to seek out the high, becoming dependent on it and addicted to it. But the outcome itself is likely. 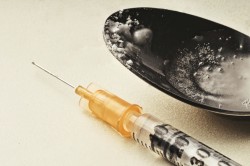 Heroin is cheaper than opium.

One reason many users may switch to heroin is because it is cheaper and much easier to obtain than opium. This is also the reason why many prescription opioid abusers begin using heroin instead; in fact, in the surveys mentioned earlier, a large number of those questioned revealed just this.

Heroin itself is relatively cheap and available, and although prescription opioids can be obtained rather easily (if not inexpensively), it can sometimes be difficult to actually obtain opium. Because there are synthetic and therefore easier to obtain drugs on the market, many people who seek opium are not able to find it or are sometimes even given a different type of drug. Many individuals who begin abusing this substance decide later that it is just easier to use heroin.

Though the Drug Enforcement Administration has stated that an opium high is similar to a heroin high, many people are under the impression that the euphoric effects caused by heroin are better than those caused by any other opioid-based drug. Therefore, some individuals eventually switch to heroin just to see if it is somehow “better.” This can also occur because of the high tolerance opioid drugs can build up in their users, causing a person to seek out a stronger substance that will, in their hopes, counteract their tolerance for the drug they are already abusing. This is also similar to what occurs when a person starts abusing prescription painkillers and eventually switches to heroin.

All in all, there is a strong likelihood that someone who regularly abuses opium will switch to heroin eventually, if not to counteract tolerance than to minimize their cost or trouble. This is why it is so important to seek treatment as soon as possible before your drug abuse becomes more severe or more dangerous, leading you toward addiction, overdose, and possibly death.

Are You in Need of Opium Addiction Help?

Call 800-429-5210 (Who Answers?) today to receive the help you need. We can give you information about treatment options in your area as well as other tips to help you stop abusing opium and start taking your life back.